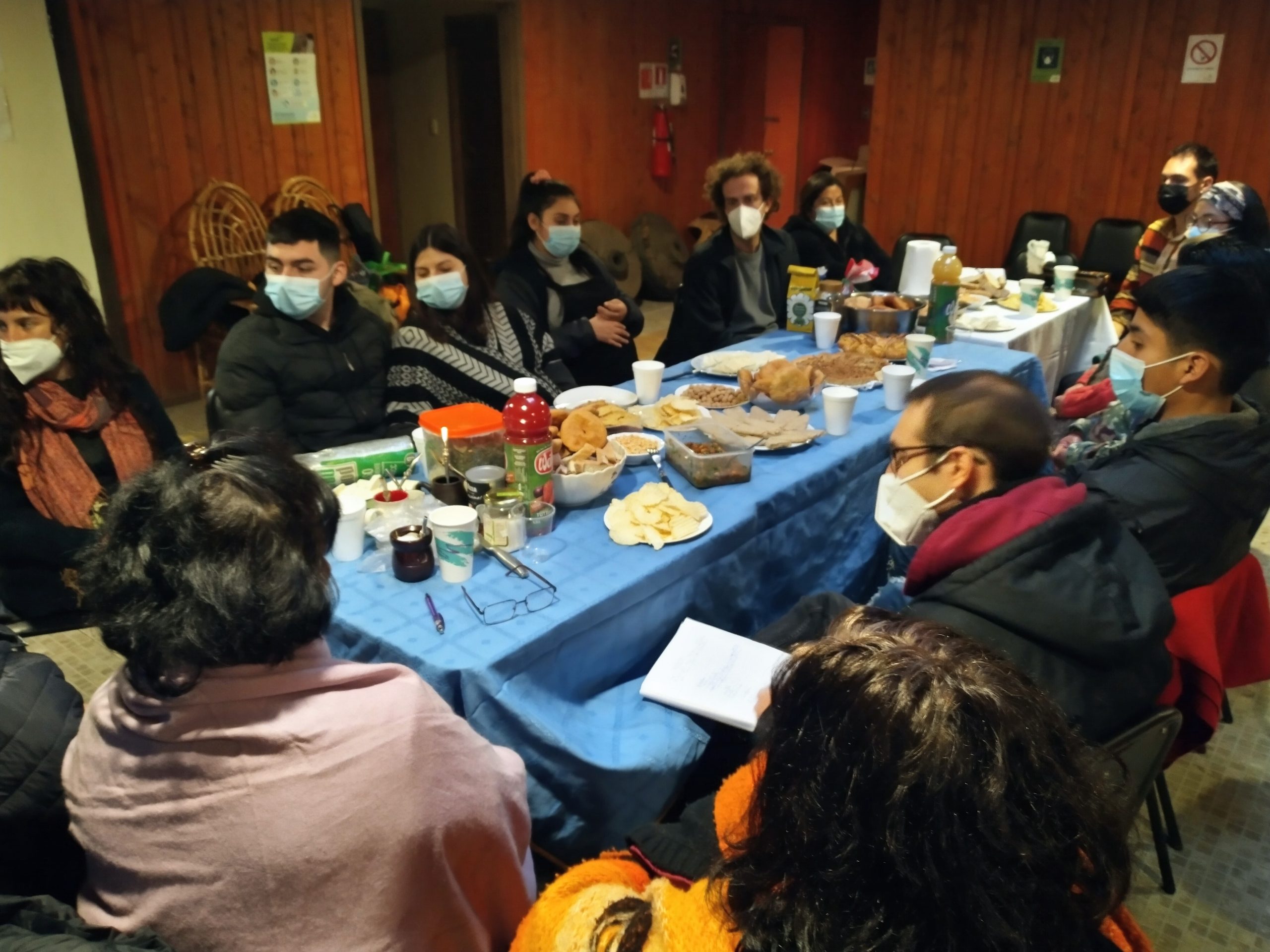 After a few days of travelling, we finally arrived at the location of our civil service year. It is the city of Malalhue, in the municipality of Lanco, Los Ríos region, in the macrozone Sur. Upon arrival we were splendidly welcomed by representatives of Medema, the Organización Mujeres Emprendedoras de Malalhue, our local partner.

The project in which Comi and Medema collaborate aims to strengthen the role of young people, supporting their personal, identity and professional development, through the dissemination of Mapuche history and culture among young people.

In the region, as in the whole of Chile, there are serious inequalities in education, health, access to services and resources, with particular disadvantages for the original peoples. The Mapuche’s precious social and cultural heritage is under threat due to the development model imposed by Chile’s neoliberal policies since the 1970s. Malalhue itself is surrounded by pine and eucalyptus trees, non-native plants, monocultures in the hands of forestry companies that alter the environmental balance of the region and have considerably reduced the arable land. A survey carried out by Comi in 2018-19 showed that 90 per cent of young people in the municipality of Lanco between the ages of 13 and 19 claim to have little or superficial knowledge of Mapuche culture. This precarious state of identity, combined with high unemployment and youth emigration, is one of the main causes of high alcohol and drug consumption among young people.

In our first meeting with Medema, we had the opportunity to introduce ourselves and get to know the women farmers and entrepreneurs who make up the
as well as their families. Their work is as difficult as it is important. For years, they have been carrying out a new project of life and collective work, in the wake of the Mapuche community tradition.

Through the rural development programme, they share typical moments of the indigenous agrarian tradition, especially the cultivation of beans and medicinal plants. They sponsor and organise fairs and markets where they sell agricultural products, but also handicrafts, such as wool woven on a traditional loom. Agricultural life, health and physical well-being, and the transmission of ancestral culture are all intertwined in the projects that these women carry out on a daily basis, struggling against the disintegration of their social fabric.

For us Comi civilists, it is a privilege and an opportunity to be able to share a part of this journey with them. For our part, with the support of our local supervisor, Pilar Reuque, we intend first of all to provide all the help we can to Medema in its projects. We want to propose various activities in the village schools, such as theatre, music and technology workshops, and others aimed at citizenship, such as a community radio station, sports tournaments, book presentations and cultural events.

We have only just arrived, and we are beginning to understand the complexity of such a fascinating reality full of contradictions. There are many tough but stimulating challenges ahead of us. We have a great desire to get involved and above all to learn.

The first appointment and testing ground will be on Tuesday, 2 August, at the inauguration of the market in Malalhue Square. We hope to be able to contribute in a useful and constructive manner. 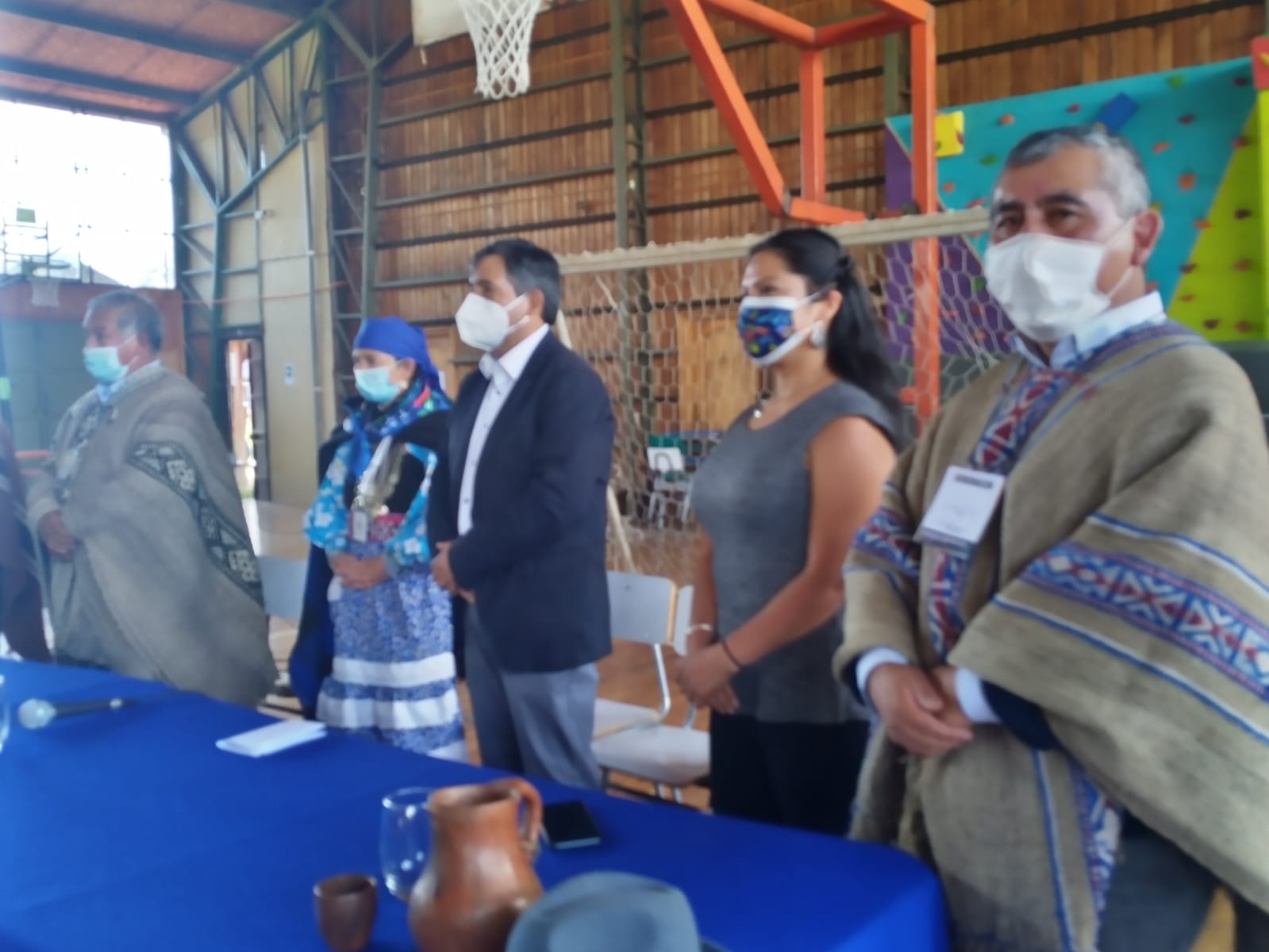 In Malalhue, Région de los rios, the Trawün Mapuche Constituyente Fütawillimapu (2) took place on Friday 14 and Saturday 15 January, with the presence of constituents Victorino Antilef, Natividad Llanquileo, machi (3) Francisca Linconao and Alexis Caiguan, elected to the constituent assembly in the seats reserved for Chile’s pueblos originarios, the people of these lands before Columbus and the Europeans arrived.

The constituent process in Chile formally began with the referendum of 25 October 2020, under the government of Sebastian Piñera, in office until 11 March 2022, in an attempt to defuse the strong protests that began in October 2019 and only subsided due to the covid pandemic in March 2020; these protests, called in Chile estallido social, brought millions of people to the streets, giving rise to massive demonstrations that started in Santiago and spread throughout the country.

On 15 and 16 May 2021, a vote was held to choose the 155 members of the constituent assembly, in which 17 seats are reserved for the original populations; of these, seven seats are allocated to the Mapuche pueblo, two to the Aymara pueblo, one for the pueblos diaguita, colla, atacameño, quechua, yagán, kawésqar, chango y rapa nui, while the Chilean Afro-descendant pueblo was excluded. In addition to the seats reserved for the pueblos originarios, another historic step in their recognition is the election as president of the Convención constitucional of Elisa Loncon, an academic, linguist and Mapuche activist. The constituent also sees a strong majority of left-wing forces, many of them non-partisan and independent of the historical Chilean parties.

The Constitution that is in the process of being written and should be approved in a referendum in August or September 2022, unless postponed, would replace that of 1980, issued by the Council of State of Pinochet’s military regime and thus its direct legacy, approved in a referendum and subsequently amended only in certain parts. The intention of the left-wing forces participating in the Convención Constitucional is to change it todo, to completely change the system, to create a Chile that recognises civil and social rights, with a focus on democratising the political system, reducing inequalities, health, education, feminism, the environment and water rights.

As far as the pueblos and nations pre-existing the Chilean state are concerned, their inclusion in the constitutional writing process passes through the creation of the Commission on the Rights of Indigenous Peoples and Plurinationality, in charge of drawing up a ‘Basic Document’ based on the rights of pueblos originarios and international treaties, such as ILO Convention 169 and the United Nations Declaration on the Rights of Indigenous Peoples, which guarantee the participation of original peoples in decisions that may affect them. In order to elaborate this Basic Document, five fundamental principles are established, on the basis of which a catalogue of rights to be included in the new Constitution, if shared by the original peoples, has been drawn up.

The first is the principle of Plurinationality and Free Determination of Peoples, and it calls for the creation of a plurinational Chile, which recognises in the Constitution the existence of different nations pre-existing the Chilean State with the right to self-determination, effectively challenging the Western notion of the State based on the assumption of the inseparable unity of State and nation.

The second principle concerns interculturality and decolonisation, and proposes to decolonise thought in order to recognise, on a level of equality and mutual respect, the different forms of knowledge, the differences between cultures and their ways of conceiving, seeing and knowing the world, making possible a horizontal dialogue that values differences.

The third foundation is Buen Vivir, living well, called Kume Mongen by the Mapuche pueblo and Suma Qamaña by the Aymara pueblo. This is life in plenitude, a form of living in balance and community, in which human beings and nature complement each other; a peaceful coexistence in which the person is in harmony with himself, with other people and with nature that surrounds him.

The fourth guarantees the care and respect of the rights of nature, also identifying it as a subject of law, and recognises the original peoples as curators of the natural balance in their ancestral territories, as well as the spiritual bond of peoples with their territories.

Finally, the fifth principle establishes equality and the prohibition of discrimination, reaffirming that original peoples are free and equal to all other persons and peoples, and therefore cannot be discriminated against in the exercise of their rights, particularly in relation to their indigenous origin and identity.

Despite the hopes pinned on the constitution-making process, there are obviously different political forces in the Convención, and there are strong fears regarding the real chances of the text being approved by referendum, and various perplexities regarding the limited time available to the Constituents and the need for a two-thirds majority in the assembly to be able to include norms in the constitutional text, factors that could defuse, at least in part, the radical nature of the demands.

The Trawün, which took place on the occasion of the Territorial Weeks, was organised by Victorino Antilef and Carmen Caifil, candidates in an electoral pair to ensure gender equality and elected as Mapuche representatives of the Région de los Ríos in the Constituent Assembly; Victorino Antilef not only represents the Regions of Los Ríos, Los Lagos y Aysén in the Convention, but is originally from the Mapuche Community of Antilhue, in the Comuna de Lanco. The purpose of the meeting was, on the one hand, to dialogue with the Mapuche communities of the Région de los Ríos on the principles, demands and fundamental points to be included in the new constitution, so that they could propose them to the different Commissions, and on the other hand, to incentivise the communities themselves to propose norms to be included in the constitutional text, since the indigenous peoples have special ways of proposing them (4), with much smaller numbers than the normal law initiatives.

However, the original peoples do not have a homogenous opinion with respect to the constituent process and the trust to be placed in the institutions; during the first day of the meeting, many doubts arose as to whether it was appropriate for the Mapuche people to participate in a petition convened by the state, inserting themselves in a process for the recognition of the rights of the pueblos originarios within the Chilean state, in effect fortifying the same state system responsible for having taken land from the Mapuche pueblo. On the one hand, the Mapuche people have a treaty still in force with the Chilean state, the Treaty of Tapihue of 1825, which recognises the lands in the south as Mapuche territory; on the other hand, the inclusion of the Mapuche people in a state logic risks defusing the possibilities of autonomy and self-government of the original populations.

During the two days of work that took place in Malalhue, there was a first moment of discussion during which these issues, doubts, perplexities, fears and criticisms were highlighted and debated, and a second moment in which, in the light also of the previous discussions, we divided into working groups and tried to make more concrete proposals regarding what we want to include in the new Constitution, net of the mistrust of its real effectiveness for the Mapuche pueblo. As pointed out by Machi Francisca Linconao, who has been in prison for her activity as defender of human rights and the Mapuche ancestral territories in opposition to the Palermo company, the ultimate objective is the autonomy and self-determination of the Mapuche pueblo, as well as the recovery of all the ancestral lands that have been taken from the communities; individuals, communities or loffe (5) can and must choose whether or not to include support for the institutional process among the strategies, or to continue the struggle in other ways and along other paths.

Being in Chile at this historic moment of change is certainly an opportunity to be able to observe the process closely, both from an institutional point of view and in terms of how it is received by the people of the territory, and to be able to follow closely how the process of writing the new Chilean Constitution will evolve.

3 – Mapuche spiritual figure, the one who cures illnesses and communicates with the spirits

5 – It is the basic form of social organisation of the Mapuche pueblo, consisting of a family clan or lineage that recognises the authority of a lonco